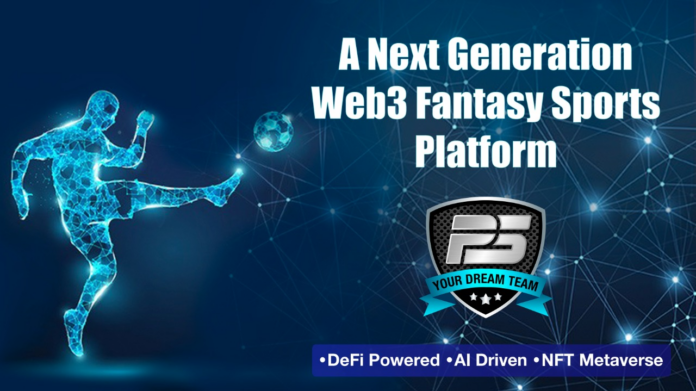 2. PROJECT OVERVIEW: WHAT IS Polysports?

Polysports is a play to earn gaming platform where users use their skills to create, compete and earn cryptocurrencies and are rewarded for contributing to the success of Polysports ecosystem.
Our vision is to have one of the largest communities of passionate sports lovers, crypto enthusiasts & traders who can benefit from our value-added services and have a great gaming experience.
With the use of blockchain technology and inbuilt wallet, Polysports is bridging the gap between Web2 and Web3 users. Our users not only get to play virtual games by creating competitive teams using their skills but also socialize, create, trade and collect rare NFTs and play games in the metaverse.
THE GLOBAL FANTASY SPORTS MARKET SIZE TO CROSS USD 49 BILLION IN 2026, GROWING AT A CAGR OF 14% DURING 2020-2026

Participation in sports is growing fast. BCG predicts global sports participation is expected to increase by another one billion people by 2025, reaching 3.5 billion people. This makes sports the second most common global leisure activity after traveling, with 35% of the world’s population participating in sports at least once a month.
According to Allied Market Research, the Fantasy Sports market revenue was 15.6 Billion USD in 2019, and will reach 48.6 Billion USD in 2027, with a CAGR of 12.67%.
Total TAM 2 billion Gen z Population > India alone has 472 Million and 250 Million SOM
In terms of platform-wise segmentation, the mobile application outperforms website-based platforms. During the 2020-27 period, the mobile segment is expected to grow even bigger as it will continue to enjoy a double-digit CAGR of 14.8%.
If viewed according to demographics, then the fantasy sports market can be broken down into the following age groups:
Of the three, the 25-40 years segment holds a significant portion of the market currently, and this trend is expected to remain the same in the near future. On the other hand, the <25 years segment will witness an exponential growth during this forecast period of 2019-2027, owing to a higher CAGR.
Ease off legality concerns
Favorable regulations and rulings have helped bolster adoption. For instance, the 2017 ruling in favor of Dream11 by the High Court of Punjab and Haryana, and subsequently by the Supreme Court of India has helped address legal issues surrounding the game.
The fantasy sports format was interpreted as a game of skill instead of a game of chance, thereby disavowing any ties to gambling. Following this, fantasy sports providers in India also promoted their product as a game of skill to reaffirm this belief. An example of this is Dream11’s “Khelo Dimaag Se” campaign which highlighted the skill-intensive nature of the game.
Synergies between Fantasy Sports and sports leagues
In recent years, fantasy sports providers are making inroads in sports leagues through sponsorships and tie-ups. A few notable examples are Dream11 becoming the official fantasy game partner of prominent cricket, kabaddi, hockey, basketball, and sports leagues. MyTeam11 is partnering up with Pro Volleyball League and Pakistan Super League. Finally, the Indian Premier League (IPL) also launched its own fantasy league.
The most popular Fantasy Sports products are
Users of fantasy sports have exploded especially in emerging countries. With the Increased technology penetration such as smartphones, the internet, etc. & growing investment in online gaming are anticipated to drive the growth of the Global Fantasy Sports Market. The fantasy sports market is driven by the launch of various apps for fantasy sports. Key Markets are the US, China, UK, Germany, and India.
During the Covid-19 pandemic, various governments imposed movement restrictions that shifted individual’s fun time from going out to online games but the fantasy market has witnessed a significant fall during lockdown due to cancelled major sporting events around the globe.
The fantasy sport market has started regaining its growth after lockdown as the events are organized without real audience and the market growth is expected to rise in the coming time. 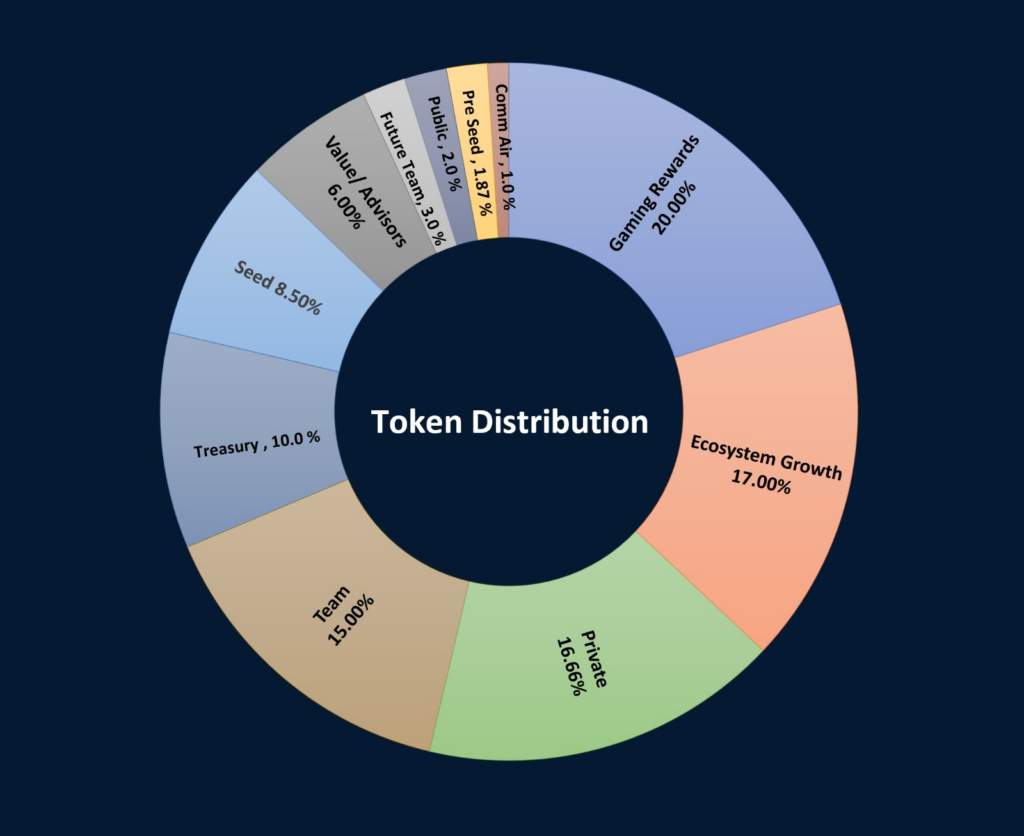 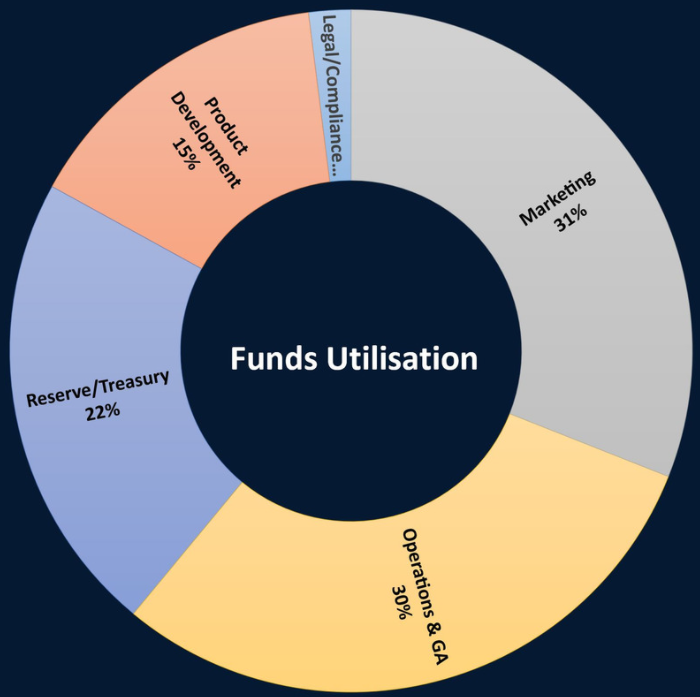 The $PS1 ERC-20 is a native and a unified token to be used for different games that are part of POLYSPORTS Ecosystem.
PS1 would be used across the Polysports ecosystem to pay contests fee , buy assets, join casual and RPG games, redeem game rewards, fiat swap redemption etc.
Users would be earning rewards based on engagements within the platform based on higher gameplays and engagement in various social media channels leads to better deals and rewards. Additionally, users can stake, lock and spend $PS1 tokens with specific game environments to earn reward points which can be used further in various activities within the platform.

Polysports users get to earn $PS1 by referring friends and family. Polysports provides win-win situation for both referrers as well new joiners.
Strong Referral System : Earn additional monthly income from 7 levels of referrals as they play and earn by staying active and participating in contests. 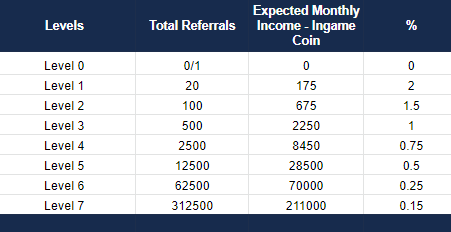 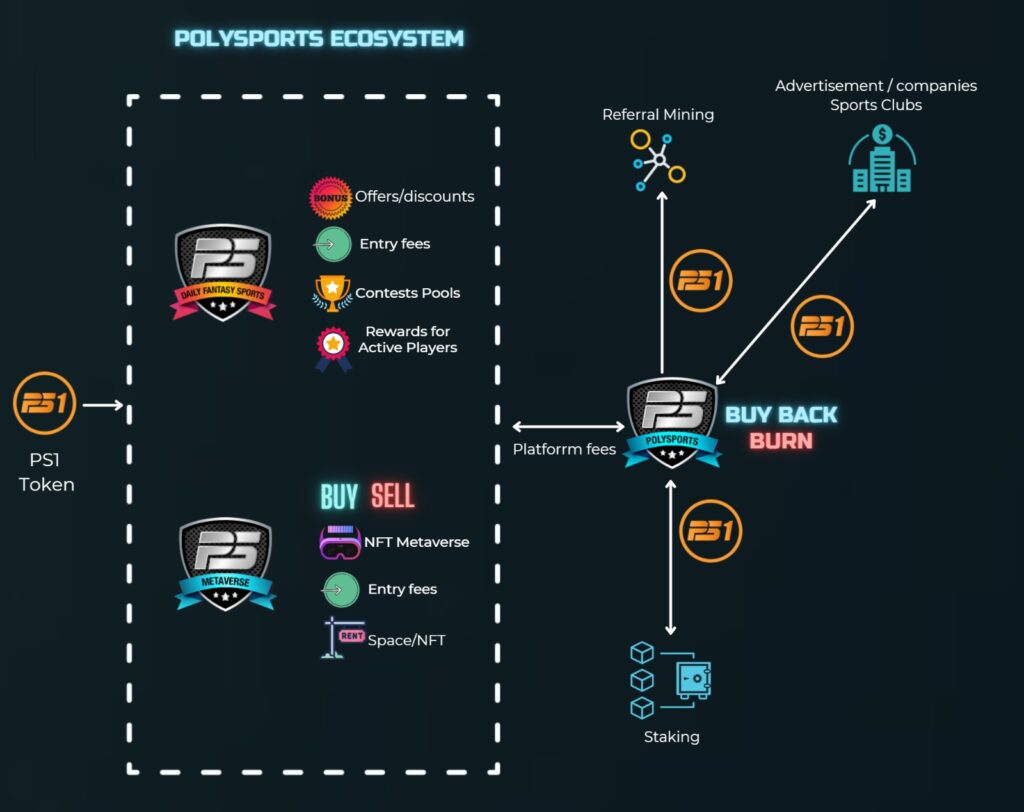 Advertisers or sports clubs who target their fans would be buying $PS1 tokens from the open market and would be paying platform fees for the listing, services, or space used within the platform.
Staking/farming
$PS1 tokens would be used by players, traders, or users to available freemium and premium services from the platform by staking and locking the tokens.
Users would be able to stake and farm $PS1 Tokens in response to in-app promotions and contests that would run from time to time to earn extra $PS1.
Additionally, users would get discounts in form of reduced or No Platform fees for the duration of staking.

Quarterly a part of revenue would be used to buy back $PS1 tokens from the open market to airdrop in-app promotion and burn to drive a healthy Token circulation within the app and in the open market.
$PS1 would be airdropped to new users to cover free gameplay and transaction fees as part of the user acquisition strategy to attract new users and give a taste of the platform.
Through profit-share (Buy/Burn), staking and gamification to encourage holding we wish to deliver value to token holders.
Our core focus would be on user adoption and generating enough activity to fuel usage of $PS1 tokens, ensuring good circulation, scarcity, and demand of $PS1 tokens in turn increasing the value.

Sushant Tewary – Founder, CEO
The Leader– An avid coder, technologist and entrepreneur with deep interest in AI-ML, Blockchain and sports. Founded and scaled social network like Wirepitch. Sushant has been in crypto space as an investor since 2017 and have witnessed it all. He helped in ideating and leading the execution of the entire concept for PolySports Ecosystem.
Abhijeet Verma – Co-founder, CTO
The Techie – 10+ years experience in creating robust and scalable applications, Technology Enthusiast, Blockchain, Full Stack Dev, DevOps, An Entrepreneur helping in scaling and providing best solution to Polysports Platform.
Sanjay Sharma – Co-founder, COO
The Maestro– An entrepreneur with experience in building and scaling sports applications from the scratch. With the expertise in Mobile and Web development he has brought the best practices to the PolySports Fantasy Application.
Manisha Tiwari, Program Manager
The Manager – 14+ years of extensive experience in managing multifaceted projects, expertise in project and business operation management, an avid crypto & stock investor and an occasional writer.